This isn’t brand new data, but I came across it last week and thought it would be cool to share here. No need for me to write a 30,000 word blog post or white paper on what it all means. I will give you the main bullets but the graphics kind of speak for themselves. You should be able to connect the dots all on your own.

1. The main line: Global media consumption doubles every 25 years or so. Bear in mind that there are only 24 hours in a day, so that curve eventually levels off (even with second and third screens… but we won’t get into that today).

Print is steadily shrinking and has been since the 1940s, contrary to popular lore about the internet killing print. This is not a new phenomenon. It’s accelerating, sure, but it isn’t new. TV started that trend long before most of us were born.

Analogue TV and radio formats have been replaced by digital formats. Radio has been relatively flat for a very long time. TV saw enormous growth from 1940 to 1980 but has been relatively flat ever since. Note that this graph doesn’t look at the growth of channels (channel proliferation and fragmentation, but consumption only. Adding 100 new TV and radio channels per day wouldn’t affect consumption).

Outdoor has been relatively flat for over a decade, as has been cinema.

What this graph tells us:

Mobile cellular subscriptions are steadily increasing worldwide each year, as is the number of internet users. Active mobile broadband subscriptions are also growing quickly. That’s the black bar on the graph. It isn’t even there in 2006 but by 2010, it already reaches about 1 billion.

What does this graph show us?

Bear in mind: Mobile broadband subscription = 1 user. Fixed broadband = several users. It’s simple math. Regardless of the apples to oranges comparison, growth is growth. Shift is shift. 75% of media will be digital in just 4 years. 80% of it will be digital in 8 years. Mobile devices are becoming the interfaces of choice for digital content. If you aren’t building your business processes and designing your content with this in mind, don’t blame “the economy” for what is about to happen to your market share.

Now let’s look at a quick graph on the relationship between age and internet use in developing economies vs. developed economies:

Now look at this:

See the change in just 5 years?

Here’s another one that should make you think a bit, especially if your company has a global footprint: 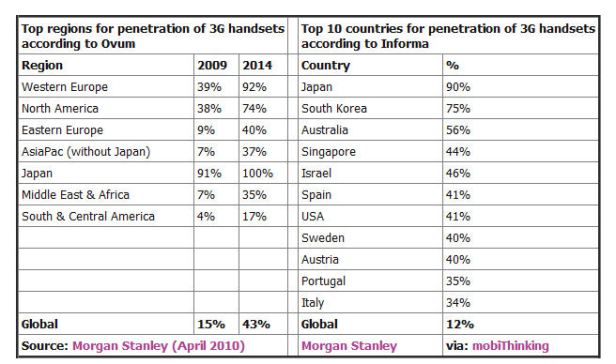 1. Globally, 45% of internet users (regardless of the interface) are under the age of 25. Though it may be obvious to most of you, don’t take for granted that every CEO and CMO has figured this out yet: It doesn’t matter if your typical customer is mostly over the age of 35. In 10 years, those 25-year-olds will be potential customers and they will expect you to do business the way they want you to do business. Better start working on them now. And while you’re at it, better start working on bringing every aspect of your business and its marketing/communications up to speed. You wouldn’t believe how many senior executives completely miss this.

2. Developing economies have some catching up to do when it comes to internet use, but they are quickly closing the gap.

3. Look at the growth of 3G penetration between 2009 and 2014: From 39% to 92% in Western Europe. From 9% to 40% in Eastern Europe. From 38% to 74% in North America. Japan hits 100% two years from now. 100%. (Japan is the model, by the way.) Even developing regions like Africa, the middle East and AsiaPac (minus Japan) are quadrupling 3G mobile penetration in the next two years. We are moving towards 80% of all media being digital. Mobile devices are increasingly becoming the digital interface of choice for consumers. Connect the dots.

Here’s a thought if you still don’t understand how this applies to your business: Follow the money. If it isn’t clear why any of this matters or even where things are going, look no further than shifts in advertising budgets in relation to digital and other media:

What do you see? Ad spend is flat in print (actually shrinking a bit) while digital ad spend is steadily growing. Every graph that compares online ad spend to other types of media ad spend look basically like this. If you don’t understand why this is happening, the graphs further up the page will help connect the dots.

Here’s another graph that ought to make you think about how your media planning strategy should already be shifting:

What this graph shows is the point where online video wins the attention war and TV begins to recede. Same content but different interface, different medium, different level of user control. 2019 will be here before you know it. What are you doing today to prepare for the television set’s Waterloo? From media buying to content production and distribution, are you sitting on your hands talking to analysts about future trends or are you staffing up with people who understand this and know how to prepare you for it?

Let’s continue with today’s #graphfest. This ought to shed some light on what is happening on the interface front:

The 411: Desktop PCs are flat and mobile PCs (laptops) are growing. No surprise there. Also no surprise as to the growth of smart phones and tablets. But check this out:

Smart phones sales overtook desktop PC sales in 2008 and will take over mobile PC (laptop) sales in 2013. That’s next year.

Tablet sales will overtake desktop PC sales (that boxy thing taking up space in your employees’ cubicles) next year.

If you are an executive, go for a walk around your offices and ask yourself: What decade are you operating in? In fact… What century are you operating in? Look at your business processes, internal collaboration, media planning and productivity. Go spend a day at a media conference or tour your local coffee shops. Ask yourself if your business is operating in a bubble or if it is as technologically and strategically competitive as it could be. Be honest with yourself. Tip: If the average twenty-something hipster lounging around at Starbucks is better equipped than your average middle manager or business development team, the answer is no. Here’s another one: If your business isn’t creating apps or content specifically designed for these new devices (let alone social channels), the answer is also categorically no.

Every time I run into an executive working on a presentation on a plane, I look at what kind of tech they use. Nothing against Lenovo and IBM (great companies) but whenever I see one of those boxy black thinkpad laptops with the little red button in the middle of the keyboard, I cringe for that poor sap whose boss forces to work on outdated tools. It’s 2012. Shape up. You don’t see 20-year old tech winning on the racetrack, the field, the court or the links, right? Business is no different from sports in that regard: 20-year-old tech doesn’t give anyone an advantage. All it does is make you less competitive. Stop doing that to yourself. Move on. Look forward, see what’s coming and get unstuck.

Here’s a thought: When the world is changing faster than you are adapting to that change, it’s time to start a) worrying, and b) doing something about it. The idea isn’t even to eventually catch up, mind you. That’s a defensive position, a survival position. The idea is to actually get ahead of that change. That’s where the real competitive advantage is. Survival is a nice default position, sure; many businesses aren’t even there. But with only maybe 5% more thought and work than it would take to just play catch-up, you can shift from being just an “also in” company to becoming the leader in your industry or category inside of 5 years. That sort of surge in competitiveness doesn’t happen by accident. It takes will, foresight and initiative. That takes leadership. Real leadership. And sorry to have to tell you this, but real leaders make it a point to know their shit. “I don’t understand this new digital stuff” isn’t leadership. It’s an urgent call to action.

One last little media-related graphic to close today’s post and help you get your bearings:

Hopefully, this post will help you (or your boss) connect the dots between today and tomorrow a little bit. Something to think about: Becoming more “social” is only part of the shift that is taking place in media. It’s important, vital even, but without understanding how media as a whole is evolving, being “more social” probably won’t do most companies a whole lot of good. We’re seeing that already. There is a much bigger field, and the more of that field you and your senior leadership see, the better equipped you will be to not only survive the next decade but come out of it stronger and more competitive than ever. That’s the goal, right?

Plan beyond next quarter and/or year.

Get IT more involved in the day to day discussions that affect your business.

You aren’t necessarily going to become a digital business, but your business does need to be as effective in the digital space as it is everywhere else. Welcome to the great reshuffling of the Fortune 5000 world.

PS: I will be speaking about this in Brussels at the end of the month for Marketing Day Belgium. If you happen to be around and want to discuss this in greater detail during the Q&A or after the session, let me know. I look forward to it.

If the Brandbuilder blog isn’t enough, Social Media ROI provides a simple, carry-everywhere real-world framework with which businesses of all sizes can develop, build and manage social media programs in partnership with digital agencies or all on their own. Do yourself a favor and check it out at www.smroi.net. Now available at fine bookstores everywhere. Also available in German, Japanese and Korean.