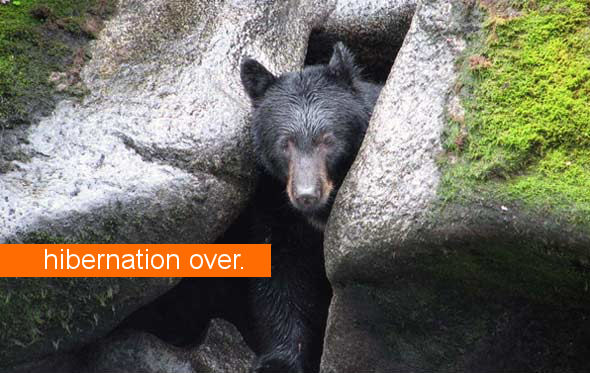 Oh… I’m sorry, that’s right. 2009 kind of sucked. Most people are glad it’s over. Me, not so. Not that 2009 rocked my world or anything, but I am a bit sad that we couldn’t make it better. Know what I mean?Starting by giving all the people who lost their jobs since H2 2008 their jobs back – or better yet, whole new jobs. Jobs they like even better. That would have been good.

Another way we could have made 2009 better might have been to come together in time of crisis instead of polarizing ourselves around issues that shouldn’t be issues to begin with – Republican vs. Democrat, Conservative vs. Progressive, Social Media vs. Traditional Media, earned attention vs. bought attention…*sigh* Seriously? 10%+ unemployment and we’re debating ideology? Seriously?  So yeah, 2009 could have gone a little smoother for everyone if we had spent more time working TOGETHER instead of against each other, or – as it were – off on our own trying to score our own little slices of pie.

We can do better than this. Much better, in fact.

I’m sad to see 2009 go, not because I liked it that much, but because for all the talking and blogging and tweeting and arguing we managed to do, we didn’t get a whole lot done. The US is still bleeding jobs. Some of my friends have been out of work for over a year. In other words, though most of us managed to pay the bills, 2009 came and went, and we didn’t solve anything. We didn’t take 2009 anywhere.  We just… talked. And tweeted. And waited for things to get better, as if that would happen all on its own: The magic economy restoring itself through… divine intervention. Truth is, 2009 came and went, and we failed to fix much of anything. Not exactly the best way to end a decade now, is it?

When I was training to be a Fusilier Marin, much of the training I was put through was intended to boost individual performance: Obstacle and confidence courses, weapons training, PT, classroom instruction, etc. The basic stuff, essentially. But the real value of the training, especially as an officer, was the portion of it that emphasized teamwork rather than individual performance. And I am not talking about “team building exercises” here. We’re way beyond the “close your eyes and fall backwards so your office mates can catch you” stuff. I’m talking more about getting dropped inside an empty 15ft-deep WWII concrete fuel tank (more like a giant concrete crater with impossibly vertical walls, in case you’re trying to paint yourself a mental image) with 6 guys and no gear with a single mission: Get yourselves out.

How the hell do you do that? It’s dark, it’s cold, you’re hungry and sleep-deprived, no one on your team has ever done it before, and you have until dawn to figure it out or you’re all flunking out of the program.

Well, I’ll tell you now what: You start working together is what. You’re in a hole (literally) and you have to get yourself out. That’s the problem  – which isn’t unlike the problems that most companies face today. So what do you do? Do you start barking out orders? Do you assert yourself as the “project leader?” Do you build a plan based on ideology? Nope. Not if you want to get out. What you do is start by clarifying the problem as a team, then coming up with ideas – as a team, hen testing the ideas – as a team. Until you figure it out. And that starts by putting your ego aside and admitting to yourself that sometimes, you are more valuable as a sturdy cog than as an inadequate hub.

Playing Rambo (in the military world as in the business world) will get you nowhere fast. Survival and success both come a lot more easily when you rely on a team – a community, even. Sure, sometimes you have to do stuff on your own, but that should be the exception rather than the rule. If one supergenius is worth his/her weight in gold, then surely a team of supergeniuses is unstoppable. Right?

So the question then is, now what?

It’s 2010. We just wasted most of 2009 arguing over healthcare, Social Media R.O.I., traditional vs. social marketing. Are we going to do the same thing in 2010? Are we going to turn 2010 into 2009 Part 2? Let’s hope not. If that’s your plan, have at it. Me, I have other plans for 2010: I am not interested in being a solo operator. I have no ambition to be the next social media or business strategy or brand management guru. I have absolutely no want to keep doing this on my own. There’s no value in it for me. (As much as I dig the recognition from time to time, I don’t need the ego trip.) None of this is about me. It is 100% about doing things better.

How we bring social media and business together in the real world isn’t through thought leadership alone. It’s through collaboration. Through teamwork. Through PRACTICAL application. You don’t get yourself out of a hole by talking about it. You get it done by actually TRYING things and learning from what works and what doesn’t until you and your team are out of the hole. That’s how it works. There is no other way. Staring up at the ledge won’t help. Barking orders won’t help. Firing your teammates won’t help. Throwing money at the hole won’t help either. Everyone has to pitch in, roll up their sleeves, and do their part. It’s bloody, messy business. Real work is hard work. It’s uncomfortable. It’s scary, even. It can be discouraging at times. But if you work as a team, eventually, you figure out how to get your teammates out, and then help them get you out as well. Everyone does. One of the things I learned about this particular exercise is that teams that can’t get themselves out were simply teams that couldn’t work together. Escaping  (Succeeding) had nothing to do with brains or talent. It was 100% about collaboration.

So instead of putting together a list of resolutions for 2010 (the list would be way too long anyway) let me instead devote myself to this: More collaboration. With you. With him. With her. Some of you might call it “engagement” and that’s fine. I find collaboration more specific: I don’t just want to “engage.” I want to work with you. I want you to work with each other. I want to see everyone working together to get ourselves out of this massive economic hole.

Our objective this year isn’t to write the ultimate white paper or publish a best-selling business book. It isn’t to properly spend the entirety of our marketing budget. It isn’t to be promoted to some cool sounding position at a Fortune 50. It’s simply this: To help create jobs. That’s it. Not to keep your own or upgrade it, but to help create jobs. Sales jobs. Manufacturing jobs. Design jobs. By helping our employers and clients become more successful. By helping them kick ass. By working with each other for each other. To hell with egos and the me me me attitude. We need results. Real results. Measurable results. Not BS.

The economy as a whole may take a while to recover, but nothing says our clients and employers can’t recover WAY ahead of the curve. And by that, I mean in the next six months. Hiring again. Expanding. Redefining their markets from the ground up. Breaking away from their “competitors”.

That collaboration piece, that’s where I’m putting my money in 2010. The consulting and teaching, it will be less and less solo. Expect to see me collaborate more with client project teams, with subject matter experts, with product vendors, with service providers, with peers and friends and colleagues. I can only do so much on my own.

Before I start sharing the 2010 roadmap with you guys, I wanted to at least take a day or two to emerge from my annual Christmas Holidays hibernation and get back to answering emails and voice mails, and of course wish you all a fantastic new year. (A whole new one, mind you. Not just a repeat of 2009.)

Next up this week:

Red Chair strategic and operational training for the C-suite.

15 thoughts on “Hibernation over.”