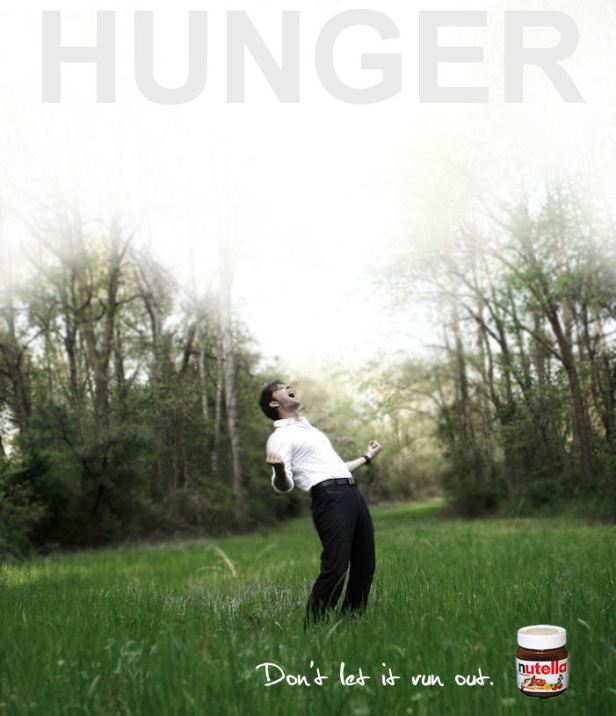 While Marketing VPs and Brand Managers are spending millions of dollars trying to craft “on brand” messages that resonate with specific demographics, consumers – empowered by digital, creative and social tools are creating their own experiences around the brands and products they love. Case in point: Ferrero’s Nutella. If you aren’t familiar with the delicious European hazelnut and cocoa spread yet, I suggest you run to the nearest grocery store and get acquainted with this chocolate-flavored nectar of the gods. (Warning: Nutella may be as addictive as crack cocaine, if not more.)

Though Nutella has garnered a pretty solid following on its Facebook fan page (over 3 million fans at last count), it still remains a fringe, slightly underground product in the United States. Squeezed between a half dozen different brands of peanut butter and a bouquet garni of jams and preserves flavors, Nutella is kind of easy to miss. Which may actually be its biggest asset: Because it isn’t widely enjoyed by everyone, Nutella lovers tend to regard their Nutellaness as special. Exclusive, even. Fans of Nutella value their passion for the unctuous chocolaty spread the way they do their love for all premium, slightly off the radar brands. So when they run into fellow fans of Nutella, sparks fly.

I have no idea if Ferrero (Nutella’s parent company) has any idea what has started to happen on twitter recently, but it’s nothing short of genius. Unprompted, Nutella fans started to discuss their love of what many affectionately call “black gold” or “chocolate heroin,” and the discussions started to snowball. Prompted by the constant Nutella discussions on Twitter, I bought a jar while at the grocery store. Evidently, others did too. Yes, you heard it right: Conversations about a product on Twitter led to an increase in sales of that product. This was completely unprompted by the Nutella product management team. This all happened purely as a peer-to-peer movement.

Not only that, but people previously unacquainted with Nutella found themselves intrigued enough by the discussions that they went out and bought their very first jars. Some (like fellow bloggers Steve Woodruff and Sonny Gill) even shared their first impressions of Nutella via video. Personally, I think that Steve’s YouTube “Nutella Newfella” idea would make a fantastic social campaign for a product like Nutella, with some pretty solid viral potential. Check it out:

Fellow Marketing honcha and blogger Kristi Colvin created a twitterface page specifically devoted to Nutella and its community of fans: www.twitterface.com/nuts-for-nutella to capture all Twitter mentions of Nutella in context . The page is even featured on twitterface’s home page. Do a google or Bing search for Nutella, and you start to find all kinds of quirky consumer-created content. Popular photo-sharing site Flickr has an extensive Nutella gallery.  This year, in honor of International Nutella Day (you bet) the Ms. Adventures to Italy blog posted 50 ways for Nutella Virgins to enjoy their first taste of the nutty nectar. And then there’s stuff like this other video posted to youtube by a Nutella fan:

Crazy? You bet. Crazy good, that is.

Interestingly, no one is being rewarded by Ferrero or Nutella for producing this kind of content. There is no contest driving this. No prize money. No vacation sweepstakes. Not even the promise of free Nutella (though Nutella does have contests). People are creating this stuff for each other. To express, share and celebrate their passion for a quirky product they feel helps define them to some extent.

When you are lucky enough to manage a brand that people around the world are that passionate about, that has garnered such a vibrant community (which generates sales and recruits new customers all on its own) and promotes your product at every turn, wouldn’t it be nice to find ways to engage that community a little bit? Maybe help it in some way? Recognize it, even?Interestingly, Nutella’s product/brand management team doesn’t seem aware that any of this is going on. Nutella’s US website gives you the opportunity to share Nutella’s site via email, and evidently, Nutella prints T-shirts, muhs and spreading knives so you can show how much you dig the stuff, to your amigos and neighbors but that’s basically it. Really? In 2009? With the fan base behind the brand? That’s it? Hello?

When your fans are doing more all on their own to promote and share your brand (and contribute to sales), maybe it’s time to revamp your Marketing strategy a little bit. Or at least… update it. Not that any of our stuff is stellar or anything (heck, it’s actually pretty awful, though in a deliciously fun way), but you can’t beat passion, peer-to-peer recommendations, and the creative energy unleashed by the social tools at our disposal today. It all works pretty well in the end… but it would work so much better if you paid attention, realized that traditional marketing  could be amplified by inspired community engagement, and… well, joined in the fun.

So come on, Nutella! We’re all having fun out here in the real world, sharing your awesome chocolaty spread with everyone we come in contact with. Are you going to join us or what? We’re ready for you. 😉

Full Disclosure: This post was fueled by several mouthfuls of Nutella.