Thanks to Fuel Labs‘ Kristi Colvin, for pointing me to Twitalyzer, another free tool that helps shed some light on people’s (and brands’) influence on Twitter. Instead of giving you an overall score (which doesn’t really tell you much unless you happen to be looking at Twitter scoring as some sort of popularity contest), Twitalyzer looks at five very specific parameters: Influence, Signal, Generosity, Velocity, and Clout.

As Twitter becomes increasingly important to online communication, the creators of the Twitalyzer believe that the need to measure the impact of our efforts in Twitter will increase a commensurate amount. While some believe that “popularity” is an appropriate measure of success, they disagree, eschewing this easily gamed metric in favor of something more robust, more fair, and more difficult to cheat.

Influence is  based on:

Signal: Twitalyzer looks at an account’s signal-to-noise ratio is a measure of the tendency for people to pass information, as opposed to anecdote. By the tool’s definition, “signal” will be counted for any update that includes at least one of the following elements:

If you take the sum of these four elements and divide that by the number of updates published, you get the “signal to noise” ratio. For example, if you published four updates and two of them contained links, your signal-to-noise ratio would be 50% (2 updates with signal / 4 total updates).

Generosity: One’s willingness to pass along ideas and call attention to those ideas we think are great. The tool’s measure of generosity is one’s propensity to “retweet” someone else, thusly creating awareness of their work and idas among your own followers. Specifically, its measure of generosity is based on the ratio of retweets you pass along to all updates you publish.

Velocity: The rate at which you contribute to Twitter. Since the Twitter Search APIs limit us to 1,500 records, at least for the time being, you are judged against a theoretical maximum of 1,500 updates per week.

Clout is often thought of as “special advantage, pull, or influence” in the real world, as in “the senator’s nephew has a lot of clout with his uncle.” Here, clout is the likelihood that other people will reference you in Twitter, as in “gee that @Mashable sure does drive a lot of traffic!” The more people who reference you, the higher your clout. Our definition of clout is simply the number of references to you divided by the total number of possible references (as governed by the Twitter Search APIs).

Pretty cool. So it looks like I need to work on my influence (still pretty low) and my generosity. What I like about Twitalyzer is twofold: One, it doesn’t care about popularity contests. Two, the five scores/categories are actionable. Because I can see where I am strong and where I am weak, I can make adjustments.

To what end, you ask? Well, in my case, to be more generous to my followers, mostly. To help them share great content with some of my other contacts who may not have yet connected with them. There’s also that whole influence thing, but that is less important to me at this point.

In comparison though, let’s look at a few major brands’ Twitalyzer scores to see how their fare against citizen BrandBuilder: 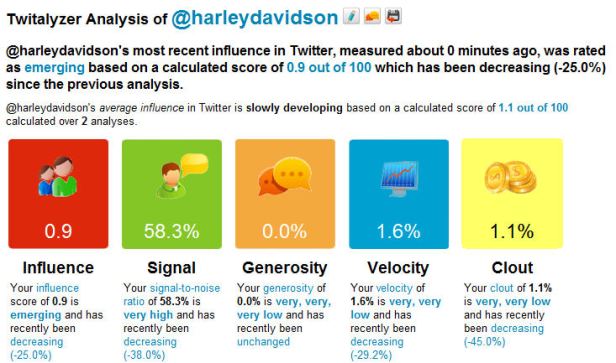 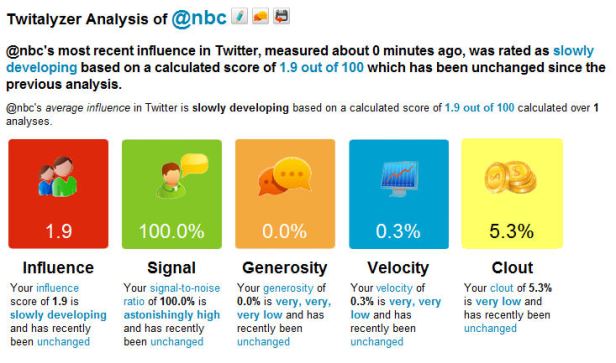 Are you starting to see the value of this type of free diagnostic tool? Look at the level of engagement (generosity) over at Dunkin’ Donuts. Obviously, there is a community manager there talking with customers and followers. Compare that level of engagement with say, Harley Davidson or The North Face (which don’t engage much at all). You can actually see what companies use Twitter as a push/self promo channel vs. companies that are using the space to build brand loyalty, drive interest in their brand rather than their deals, and actually provide value.

Look at how many of these otherwise major brands have extremely low influence and clout scores. Now look at Starbucks. Corporate SM managers: Answer me this: Can you think of any valid reason why I, Citizen Brandbuilder – with no major marketing or advertising budget, no 5th Avenue ad agency or PR firm in my corner, no fancy offices filled with well paid staffers – should have more influence and clout in the Social Media space than the brand you get paid to manage and grow?

Do you still think you have it all figured out?

Still think that you are using Social Media (and in this case Twitter) as effectively as you could?

Are you measuring the right things?

Do you know how to tie SM metrics back to growth in revenue, market share, customer acquisition and customer loyalty?

I look at some of these numbers and it is obvious to me that many, if not most brands may be hiring or promoting the wrong people to develop and manage their social media programs. Caution: Slippery slope. Just because someone knows how to set up a Twitter account and build a WordPress site from scratch doesn’t mean he or she understands how to build a Social Media practice for your organization. Do not be afraid to jump into the Social Media space, but please don’t jump in blindly. Listen. Watch. Learn. Grow with it. Be smart about it.

Because Social Media Management is still a very young field when it comes to the business world, this sort of tool can be pretty helpful in helping companies just starting out with Twitter develop metrics and objectives without breaking the bank on more professional platforms they may not know what to do with right away. Take full advantage of it.

6 thoughts on “Twitalyzer: Another fast way to measure influence on Twitter”